Rey Sheng Her Receives Worldwide Acclaim for His Book, Economy of Goodness

We are happy to share the following announcement that Rey Sheng Her’s book, Economy of Goodness—The Philosophy and Practices from the Perspectives of Altruism (善經濟：經濟的利他思想與實踐), has received multiple international awards. 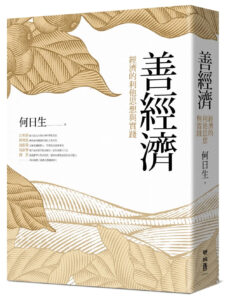 Professor Rey Sheng Her’s book Economy of Goodness—The Philosophy and Practices from the Perspectives of Altruism uses a historical perspective to offer new discourse on the idea of goodness within production, consumption, and finance. He puts forth ideas for creating optimal economic order and business ethics by “taking altruism as the foundation” and “harmony and unity as the method.”  Economy of Goodness, with its unique insights and clear and penetrating citations and analysis, received a Publication Award at Taiwan’s Golden Tripod Awards, a Special Award for Research at China’s 2020 Xiangguang Awards, and was honoured with the first annual Humanities Shravasti Award from the US-based Shravasti Foundation.

Through the concept of “cherishing the life of objects,” Economy of Goodness describes entrepreneurial production and creation that strives to improve people’s lives and enhance human qualities. The book proposes that commercial consumption should be based upon the foundation of cherishing the life of objects, expanding abilities, and broadening the value of our lives. Goodness within finance means investing capital to aid in economic development as well as solving social issues, rather than only striving to make a profit. This includes, for example, influential investing and other methods which are described in detail in the book.

The book’s author Rey Sheng Her is currently the Deputy CEO of the Tzu Chi Foundation and an Associate scholar at Harvard University, FAS, CAMLab.  He has been a visiting scholar at several world-renowned universities including Oxford University, Cambridge University, Harvard Kennedy School and Columbia University. In Economy of Goodness, he exhaustively unravels the threads of Western civilization and Eastern philosophy, from ancient Sumerian civilization to ancient Greek mythology, from Jewish wisdom and Confucian philosophy to Buddhist doctrines to search for the most powerful cultural ideas behind economic systems. He finds the answers in “goodness” and “altruism.” By having motivations of goodness and using good methods we can achieve results of goodness; this is the core thought behind the economy of goodness. The “economy of goodness” is participating in economic activities from the perspective of altruism.

Dr. Rey Sheng Her received his Ph.D. in Philosophy from Peking University and graduated from University of Southern California where he specialized in Communication Management and Policy. He was once a well-known television anchorman and producer in Taiwan and has had a long career working in media, receiving multiple Golden Bell Awards, Taiwan’s highest honour in television. The documentary “The Great Love as Running Water—The History and Development of the World Bone Marrow Transplantation” which he produced was nominated for an International Emmy Award for Best News Documentary in the Asia Pacific and Africa Regions.

In addition to broadcasting, Dr. Rey Sheng Her has extensive experience in publishing. He has served as the editor-in-chief of the magazines “Tzu Chi Medical Care” and “Tzu Chi Nursing Journal” and he has authored books such as “Altruism to Enlightenment”, “The Moment of Inspiration”, “Constructive Journalism”, “The Philosophy and Practice of the Tzu Chi Movement” and “The Great Love as Running Water—The History and Development of the World Bone Marrow Transplantation”. His exploration of the ideals of altruism in Economy of Goodness has received wide praise.

Through Economy of Goodness, Dr. Rey Sheng Her proposes “altruism” as the path by which humanity can find mutual profitability and prosperity. He believes that every person has a mindset of self-interest in addition to an altruistic heart, so the question of how to broaden altruism and limit thoughts of self-interest is the key in exploring motivations of goodness in economic activities. How can we strengthen our altruistic hearts? He proposes that the keys to transforming self-interest into altruism are giving rise to compassion by coming in contact with the suffering, finding contentedness by observing insufficiencies, knowing one’s blessings by witnessing hardship, and further being willing to hold out a helping hand to the suffering.

The goal of an economy of goodness is to reach a state of equal material wealth and prosperity for the whole of humanity as well as achieving harmonious social communities and the perfection of life through altruism. The goal is an ideal world in which all people have “physical health, material wealth, purity of spirit, and perfect harmony.”

The case study research in Economy of Goodness puts forth the Top Ten Practices for a “Goodness Enterprise:” “having conviction as the core, having values as the guiding principle, love-based management, principle-based governance, compassionate innovation, systematic altruism, circular organization, sustainability models, living with the earth, and mutual prosperity for all living things.” These practices offer businesses and enterprises a reference for the contemplation and practice of moving toward goodness and these ideas have received global recognition.

Taiwan’s Golden Tripod Award serves to encourage the publishing industry to continue to play a role in enlightening perspectives, guiding thought, and transmitting culture. The philosophy of altruism discussed in Economy of Goodness is an important realization of humanistic culture taking root in society. The book stood out from over 1,300 submitted works, receiving the Non-literature Book Publishing Golden Tripod Award in 2021, where it was the only award-winning book focused on the subject of religion and humanistic culture.

Economy of Goodness incisively analyzes how working toward the common good of humanity and the harmonious stability of society bring the greatest benefits in economic activities and the discourse of the book is committed to leading global business toward a philosophy of goodness. The book has led to widespread discussion and recognition in the Chinese-speaking world and received a Special Award for Research at China’s 2020 Xiangguang Awards.

The first annual International Shravasti Award held by the Shravasti Foundation was held with the aim bringing attention to projects that overcome differences and benefit sentient beings, good practices for environmental protection, and using the power of example to transmit a conviction in “mutual love” and “co-existence.” The Shravasti Foundation presented the Humanities Shravasti Award to Dr. Rey Sheng Her in recognition of the way Economy of Goodness promotes the spirit of “great love,” which transcends the boundaries of race, religion, and national borders and calls upon more people to care for the value of love, create benefits to others, protect the environment, and create harmonious homelands.