Based on the impact of the pandemic, travel to China with a group of researchers is still impossible in 2022. However, we will go ahead with an adapted cluster program and will experiment with “virtual fieldwork” activities.

In order to offer a varied program, we will approach the interrelation of text and image media in the context of Buddhism from various angles, some more theoretical and others based on concrete case studies. With this we hope to provide a more comprehensive overview of the state-of-art developments in this field. The theoretical part will be further emphasized by the participation of Dr. Polina Lukicheva from the University of Zurich as co-organizer, who is a specialist in research on theoretical, philosophical, and soteriological issues related to visual media in religions.

Concretely, the event will be divided into two main parts, a three-day seminar during which theoretical and methodological aspects will be addressed, and field studies presented. The second part will consist of four to five days of virtual field work, focusing on several Buddhist sites in the Anyue district of Sichuan. 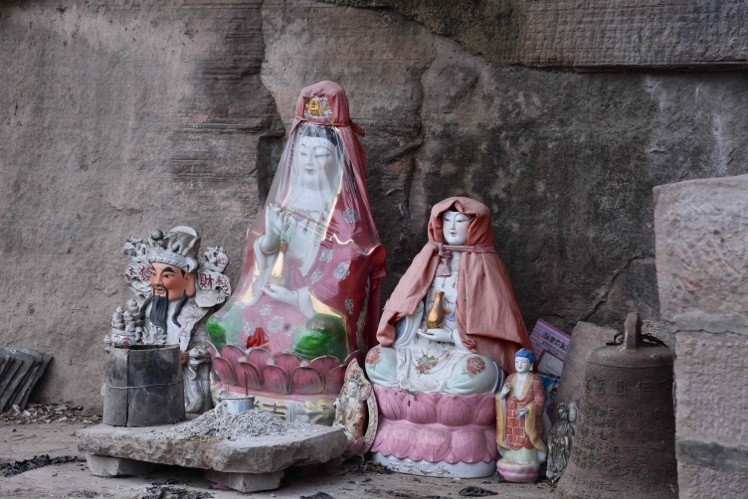 Duration of the event:

Part One – Seminar (the list of participants / lecture titles are tentative):

Text and image are the major modes by which humans make sense of the world and, more categorically speaking, construct the (meaningful) world.

In the context of a religious teaching, the role of text and image is subordinated to a soteriological goal – a progress towards the fundamental awareness of the ultimate reality or some specific form of salvation (e.g., rebirth in paradise, or in another favourable sphere of existence). While the soteriological goal is often understood to be beyond any form of representation and meaning-making, the essential value of text and image for elucidating the fundamental truth is also often acknowledged. Thus, the following tensions arise regarding functions of text and image within a religious context: How can text and image furnish the progress towards that which transcends any sort of representation and meaning-making? How to reconcile the inevitably conventional status and metaphorical nature of textual and pictorial signs with the ultimate truth they are meant to convey?

Solutions to these tensions offered by different religious traditions range from those that tend to dismiss any or at least some forms of textual and visual representation and meaning-making, to those that assert the fundamental sameness of these forms with the real.

During the workshop, we hope to gain important insights about the topic of text-image relations through studying how Buddhist teachings solved tensions of this kind. That is, we will discuss textual and visual ways of referencing, signification and meaning-making within a larger framework of Buddhist views on relations between the conventional and the real. Ideally, we will be able to reach some conclusions about whether there exist regularities between notion(s) of reality embraced by a teaching, on the one hand, and particular forms of representation and meaning-making this teaching chooses to prioritize or discard, on the other.

The seminar will feature presentations on how sources from Buddhist traditions and other relevant theoretical literature engage with  the complex interrelations between psychological and ontological aspects of meaning-making and representation – both from a broader philosophical perspective, as well as dealing with more specific themes, such as

– differences, congruities or patterns of interaction between textual and visual representational structures and referential
mechanisms;
– exegetical procedures, perceptual mechanisms and, possibly, cognitive transformations that, according to sources, are involved in aligning ordinary semantics and pragmatics of texts and image with the fundamental meaning of a teaching.

1.1 Theoretical, methodological, and philosophical issues related to the interplay of text and image

1.2 Lectures with a focus on case studies

With the background of the theoretical part and introduction to key sites in the framework of the seminar, the virtual field studies involve studies directly related to specific sites in Anyue. Since we cannot directly visit the sites, the work will be based on high-resolution images taken during previous field trips and other materials. The researchers will study these materials, extract images, write descriptions and prepare them for input in the FROGBEAR Database of Religious Sites in East Asia. 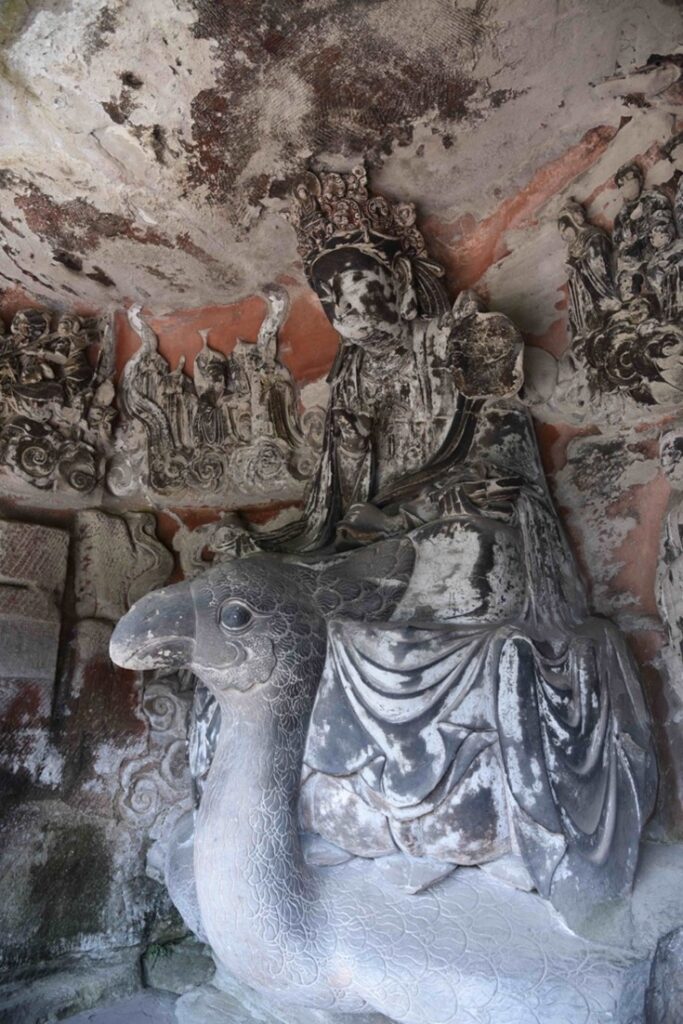 The sites selected for “fieldwork” are the following, all situated in Anyue district:

Fieldwork research will be primarily based on the photographic materials, and will also involve specific research questions related to the particular features of the individual sites (more information will be provided later). However, we will try to extend the sources / flow of information, including the following:

– Researchers will work in groups (divided according to time zones), similar to those involved in “real” fieldwork, and also applying a “division of labor” approach;

– Zotero Library (Ghent MA students have prepared a large Zotero web library with many full-text PDFs, which can be used to retrieve information on specific sites during research);

– We will try to involve “eyes in the field”, meaning that local collaborators interact with the researchers, and jointly investigate specific sites (e.g., communicate details about a site, inspect the surrounding, take additional photographs, etc.);

– “Ask the expert” (if possible, we will try to involve local experts who in direct communication can answer specific questions about a motif / site / context/ etc.);

– Throughout Spring 2022, ca. 20 Ghent MA students will closely deal with several aspects of the sites, as well as produce introductory materials; during the field work, the MA students will directly interact with the researchers and try to assist them in their studies;

– In addition, a number of supervisors will also involve in the research process;

– The concrete workflow will be communicated later; all relevant materials and information will be provided via the Ghent Ufora teaching platform;

– Research findings will be communicated every day in very short presentations and gatherings;

– Researchers will use other media of communication in addition to Zoom (and the breakout rooms), such as platforms for jointly working on documents, file sharing, etc.;

– Before the seminars / field work commences, we will provide thorough information and sample records, as well as all relevant forms, through Ufora.

The Anyue sites, situated in the Anyue district in Sichuan, and dating mainly between the mid-Tang and the Song period, are among the most interesting regions in China in terms of the integration of and the interplay between text and image at Buddhist sites. As such, a (virtual) field trip to this area is highly significant in the context of the Topologies of Text-image Relations cluster. Earlier field trips conducted by the Ghent Centre of Buddhist Studies have focused on the Dazu area, including the famous Baoding-shan which also has been the subject of intense studies during recent years (Kucera 2001, Kucera 2016, Suchan 2003, Howard 2001, Xu 2010, Lü 2015, Zhao 2018, Zhang 2017, etc.).

As compared to the “central” Dazu area, which is close to Chongqing, many of the Anyue sites are relatively distant and not so easily accessible (some of the sites are also not open to the general public). Furthermore – whereas image material in books, articles, and on the web are relatively plentiful in the case of Dazu – the Anyue sites are both under-studied and under-documented and have received far less scholarly attention (e.g., Sørensen 1998, Ledderose and Sun 2014, Sichuan Cultural Relic Administration 2015, Sun 2018). However, as the Dazu and the Anyue sites are directly related in terms of the temporal and geographical spread of specific motifs, narratives, genres, artistic styles, etc., the Anyue area would provide materials that are indispensable for a reconstruction of the Buddhist textual and visual programs of the entire Sichuan region and will be of great importance for the study of the development of Buddhist image and text production in the form of rock carvings and rock caves in China. Another interesting aspect of the sites consist of their syncretic features, integrating texts and visual motifs of various Buddhist schools (especially Chan and Huayan), esoteric Buddhism, local religious imaginations, as well as Daoism and Confucianism.

As such, research questions during the fieldwork will include the following aspects:

– The temporal layers observed in specific tableaux/sites and the diachronic changes traceable;

– Visualizations of “canons” and texts (e.g., the revolving book pagoda at Kongque dong);

– The transformation of Buddhist narratives in text and image as observable at Pilu dong (e.g., the Liu benzun tableau; with comparisons to the Dazu version of the motif);

– Donor activities and their visualization in text and image (e.g., at Pilu dong where the family names of donors are preserved, inscribed on small Buddha/bodhisattva carvings, each of them iconographically “unique”; in the context of the field study, we will try to systematically record all ca. 320 extant combinations of small buddha carvings and inscribed family names)

– The transformation of textual and image material based on the “merging” of Buddhist, Daoist, and Confucian motifs (e.g., Da bore dong; Yuanjue dong);

– The programmatic compositions of large-scale tableaux/sites (with an emphasis on the Nirvana Buddha at Wofo yuan).