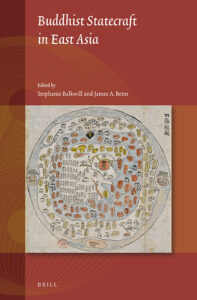 We are pleased to announce the release of the sixth volume in the series published by Brill: Buddhist Statecraft in East Asia. The book is edited by Stephanie Balkwill and James A. Benn. For more information or to order, please visit https://brill.com/view/title/61003

Buddhist Statecraft in East Asia explores the long relationship between Buddhism and the state in premodern times and seeks to counter the modern, secularist notion that Buddhism, as a religion, is inherently apolitical. By revealing the methods by which members of Buddhist communities across premodern East Asia related to imperial rule, this volume offers case studies of how Buddhists, their texts, material culture, ideas, and institutions legitimated rulers and defended regimes across the region. The volume also reveals a history of Buddhist writing, protest, and rebellion against the state.