A report of the lecture by Sarah Fink is available here. 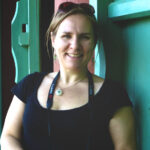