Liturgy, Icon, and Text in the Development of Esoteric Buddhism

Visualization is commonly regarded as the sine qua non of tantric Buddhist practice, and scholars have sought to trace the relationship between visualization and the use of images in the evolution of tantric or esoteric Buddhist ritual.  Thus, dhāraṇī scriptures have often been classified as ‘proto-tantric’ and marshaled to argue for the gradual interiorization of esoteric ritual. I argue that dhāraṇī scriptures are not the inevitable predecessors of esoteric ritual, that the ritual use of images and visualization are independent developments, and that eighth-century and later forms of esoteric ritual can be understood as a liturgical technology for the production of a kind of public subjectivity. Finally, I will reflect on the preoccupation with visualization in scholarly discourses about the tantras. 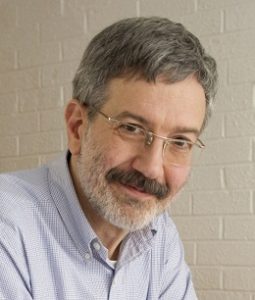 UNCG photo by David Wilson – 3/18/2010 – Photograph of Charlie Orzech, UNCG religious studies, in his office at the National Humanities Center in Durham, NC. Orzech studies the transmission of Buddhism to China in the Middle Ages.

Charles D. Orzech is Reader in Religion, Conflict and Transition in the School of Critical Studies at the University of Glasgow and Professor Emeritus of Religious Studies at the University of North Carolina Greensboro. He studied comparative religion and East Asian languages at the University of Massachusetts and took a PhD in the History of Religion at the University of Chicago. He convenes the MLitt course ‘Reading, Religion, and Culture’ as well as courses on Buddhism and Chan and Zen Traditions. His research has focused on the translation and transformation of late Mahāyāna Buddhism in eighth-through thirteenth-century China. He is the author of Politics and Transcendent Wisdom: The Scripture for Humane Kings in the Creation of Chinese Buddhism (Pennsylvania State University Press, Hermeneutics Series, 1998) and more recently was the general editor of Esoteric Buddhism and the Tantras in East Asia (E. J. Brill, 2011). He is currently writing a monograph on vision and liturgy in Chinese Esoteric Buddhism and another on Museums of World Religions.