The primary document first mentioned Ge-yi in Buddhist cannon is the biographical account of Zhu Faya竺法雅(a monk lived in the Jin Dynasty) in the Biography of Eminent Monks高僧傳 edited by Huijiao慧皎[497-554] in the Liang Dynasty, in which Ge-yi refers to a method that Zhu Faya with Kang Falang康法朗 presented enumerations of items in Buddhist sutras with Chinese traditional scriptures as instances of explication. In academic research, the term Buddhist Ge-yi (格義, Ko-i) is often rendered as “matching concepts” (“match Buddhist and Taoist concepts”, “matching the meanings”, “categorizing concepts”) which served to pare Indian Buddhist concepts to native Chinese terms and categories. In Chinese Buddhism, Ge-yi played a central role in the progress of transmission and assimilation of Indian Buddhism in China during its earliest phases. At that time, Buddhism had somehow to be “translated” into terms that Chinese could understand so as to prepared and adapted for Chinese audience through translation and explanation, borrowing traditional Chinese terms to translate and explain Buddhist ideas in Chinese language and metaphor is the most important characteristics of Ge-yi. 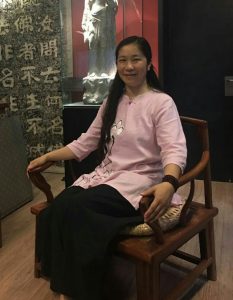