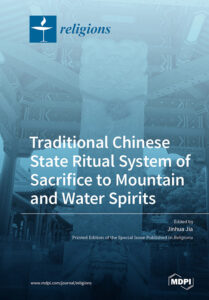 We are pleased to announce the open access release of Traditional Chinese State Ritual System of Sacrifice to Mountain and Water Spirits, edited by Cluster 2.1 leader Prof. Jinhua Jia, published by MDPI.

About the book:
This book focuses on the traditional Chinese ritual system of sacrifice to mountain and water spirits, a significant but largely overlooked sub-field of Chinese religious studies. This system mainly comprised the five sacred peaks, five strongholds, four seas, and four waterways, and was maintained for two thousand years in imperial China. As state ritual, it was constructed of by Confucian ritual culture, but in practice, it gradually interacted and integrated with various religious traditions, such as Daoism, Buddhism, and folk belief, especially in its local manifestation and dissemination. The eighteen great mountains and waters marked geographical and directional borders and territories modelled on the yin-yang and five-phase framework that helped shape Chinese people’s cosmographical understanding of the world. Together, they constituted a set of sacred spaces symbolizing the sanctioned political legitimacy of the imperium and functioning as the loca for communication with the divine, as well as the media between religion and its secular context, state ideology and local beliefs, or various ethnic groups. Through the discovery of a rich variety of historical sources, especially stele inscriptions preserved in the sacrificial temples, the contributors of the ten chapters in this volume examine the sacred peaks, strongholds, seas, and waterways respectively. While each of the chapters explores one or more perspectives, together they reveal the rich implications and ramification of the ritual system and present the first comprehensive study of this subfield.

About the editor:
Jinhua Jia (Prof. Dr.), who received her PhD from the University of Colorado at Boulder, is Adjunct Professor of the University of Macau, Research Professor of Wuhan University, and Chair Professor of Yangzhou University. Prof. Jia holds membership of the Institute for Advanced Study (Princeton), fellowship of the National Humanities Center (USA), and research associateship of the Harvard Divinity School, and she has taught at The Hong Kong Polytechnic University, the City University of Hong Kong, and Xiamen University. Her research interests include traditional Chinese religion, thought, literature, and women and gender studies. She is the author of a number of books and articles, including From Ritual Culture to Classical Confucianism (in Chinese, Oriental Publication Center 2020); Gender, Power, and Talent: The Journey of Daoist Priestesses in Tang China (Columbia University Press 2018); Study on Classical Chan Buddhism (in Chinese or Japanese, Oxford University Press 2010, Shanghai People’s Press 2013, Kyūko Shoin 2018); The Hongzhou School of Chan Buddhism in Eighth- through Tenth-Century China (State University of New York Press 2006); and Study on the Collections of Gathering and Groups of Poets in the Tang Dynasty (in Chinese, Peking University Press 2001/2015). Prof. Jia has also edited/coedited a number of books, including Li Zehou and Confucian Philosophy (University of Hawaii Press 2018); Buddhism and the Chinese Tradition (in Chinese, Shanghai People’s Publishing 2017); and Gendering Chinese Religion: Subject, Identity, and Body (State University of New York Press 2014).