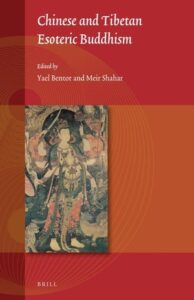 We are pleased to announce the release of the first volume in a new series published by Brill: Chinese and Tibetan Esoteric Buddhism. The series editors include Meir Sharar (co-editor of the first volume), James Benn, and Jinhua Chen. Several project participants will be contributors, including Robert Sharf on this first volume. For more information or to order, please visit https://brill.com/view/title/34456?language=en

Deciphering the oftentimes bewildering richness of esoteric Buddhism, this broadly conceived work exposes the common ground it shares with other Buddhist schools, as well as its intersection with non-Buddhist faiths. As such, the book is a major contribution to the study of Asian religions and cultures.