Guest Lecture: Clerical Privileges and the Jurisdiction of the Buddhist Clergy: Do They Exist?

Abstract: The demarcation and maintenance of jurisdictional boundaries between religious institutions and lay society have been at the center of the conflict between religion and the state since the formation of early Buddhism. Drawing on cases presented in Buddhist legal texts (Vinaya) from six different traditions preserved in Sanskrit, Pāli, Chinese, and Tibetan, Cuilan Liu challenges the Orientalist assumption that Buddhism is “lawless.” She argues that despite using a less aggressive strategy to settle jurisdictional boundaries with the state, Buddhist clergy in ancient India were not only interested in creating and implementing Buddhist canon law to govern Buddhist adherents but were also ambitious and strategic in securing legal privileges and jurisdictional autonomy in their interactions with the state. 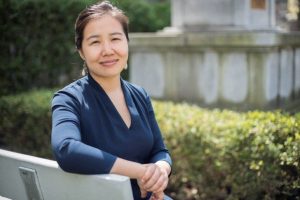 About the Speaker: Cuilan Liu is an Assistant Professor of Religious Studies at the University of Pittsburgh. She received her Ph.D. from Harvard University in 2014, where she had also made a documentary film Young Jigme screened at the 2015 International Jean Rouch Film Festival in Paris. Her research focuses on the legal interaction between Buddhism and the state in China, Tibet, and India. Her publications have appeared in the Journal of Chinese Religions, the Journal of the International Association of Buddhist Studies, the Journal of the American Oriental Society, and the Journal of Indian Philosophy.

This event is organized by the Himalaya Program, and co-sponsored by the Tianzhu Network for the Study of Buddhist Cultures and the UBC Department of Asian Studies.