A Timely Message from the Cave: The Mahāmudrā and Intellectual Agenda of dGe-bshes Brag-phug-pa dGe-’dun-rin-chen (1926–1997), the Sixty-Ninth rJe-mkhan-po of Bhutan 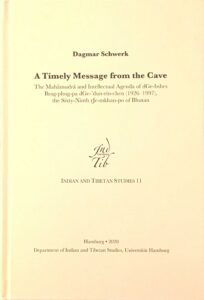 We are pleased to announce the release of A Timely Message from the Cave: The Mahāmudrā and Intellectual Agenda of dGe-bshes Brag-phug-pa dGe-’dun-rin-chen (1926–1997), the Sixty-Ninth rJe-mkhan-po of Bhutan by Dagmar Schwerk. This monograph is part of the Indian and Tibetan Studies Series (IndTib), published by the Department of Indian and Tibetan Studies, Universität Hamburg. Ebook is open access and downloadable here. For more information or to order, please visit Biblia Impex.

About the book:This book addresses the long-lasting debate about the Mahāmudrā doctrine and meditative system, that was first elicited through Sakya Paṇḍita (1182–1252)’s systematic critique in the thirteenth century. For the first time, the positions of eminent Bhutanese Drukpa Kagyü masters, in particular, between the eighteenth and twentieth centuries are made accessible to the English-speaking reader. The Tibetan text corpus deals with the entire spectrum of the controversial topics of the Mahāmudrā doctrine and meditative system. Some of those topics were discussed over centuries and partially even reaching back to earlier philosophical and doctrinal disputes in India. Furthermore, the classical Tibetan text corpus discussed here shows how these oral discourses formed into fascinating elite Buddhist textual traditions about the Mahāmudrā doctrine and meditative system and gained trans-regional and trans-cultural relevance among Tibetan and Bhutanese Buddhist masters in eighteenth-century Tibet and Bhutan. The book includes a critical edition as an editio princeps, a richly annotated translation, and a comprehensive analysis of the sixty-ninth Chief Abbot of Bhutan Geshe Drapukpa Gendün Rinchen (1926–1997)’s dense Mahāmudrā commentary in verse, the Timely Messenger, comprising the ninth Chief Abbot of Bhutan Shākya Rinchen (1710–1759)’s root text, the Pointed Spear of a Siddha. The sixty-ninth Chief Abbot of Bhutan Geshe Drapukpa Gendün Rinchen was one of the most influential Bhutanese Buddhist masters of the twentieth century. He significantly contributed as an author, scholar, teacher, and practitioner to doctrinal innovations and the modernization of religious educational institutions of the Drukpa Kagyü school in Bhutan in the second half of the twentieth century. This book also explores his life and vast literary and scholastic heritage based on classical Tibetan biographical and autobiographical accounts and his collected works in ten volumes. Until today, the sixty-ninth Chief Abbot of Bhutan Geshe Drapukpa Gendün Rinchen is highly acknowledged and revered in the wider Buddhist intellectual scene of Tibet and Bhutan.

About the author: Dagmar Schwerk is a German scholar focusing on Tibetan and Bhutanese Buddhism as well as Indo-Tibetan Buddhism. She specifically addresses the formation of doctrinal agendas covering subjects such as the Madhyamaka philosophy and the Mahāmudrā doctrine and meditative system. Currently, she works on Bhutan’s intellectual, political, and social history between the eighteenth and twentieth centuries. She graduated with a Ph.D. in Tibetology from the University of Hamburg in Germany in 2017 and is currently the Khyentse Foundation Postdoctoral Fellow in Tibetan Buddhist Studies at the University of British Columbia, Vancouver. She is also the recipient of the 2012 Khyentse Foundation Award for Excellence in Buddhist Studies at the Universität Hamburg and a 2016 Dissertation Fellow of The Robert H. N. Ho Family Foundation Program in Buddhist Studies and received scholarships from the prestigious Studienstiftung des deutschen Volkes (German Academic Scholarship Foundation).