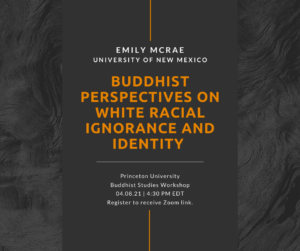 Abstract: In this talk, I locate group-based moral ignorance – such as white ignorance, male ignorance, or American ignorance – within the context of Buddhist accounts of ignorance (avidyā, ma rig pa). Drawing on the 4th century Indian Buddhist philosopher, Vasubandhu, I argue that racial ignorance (and moral ignorance more generally) is best understood as activity – an active failure to know – rather than an absence of moral knowledge. According to Vasubandhu and other Buddhist philosophers of ignorance, this activity of misunderstanding takes at least two predictable forms: confusions about the nature of identity and confusion about dependence and causation. I will show how these two paradigmatic confusions are implicated in white racial ignorance, as well as other kinds of group-based moral ignorance.

Speaker: Dr. Emily McRae is Associate Professor in the Department of Philosophy at the University of New Mexico. She specializes in Tibetan Buddhist philosophy, ethics, moral psychology, and feminism. Much of her work is devoted to issues regarding the emotions, morality and contemplative practices such as meditation. She is curious about questions such as: How do we cultivate our emotions and transform our emotional dispositions? Can we choose our emotions? How does the process of cultivating and transforming emotions, especially through meditation practices, figure into one’s moral development? How can Buddhist contemplative and ethical practices contribute to understanding and overcoming unjust social institutions such as racism and patriarchy?

Sponsored by Center for the Study of Religion, Princeton University, co-sponsored with the Department of Religion.