This lecture is brought to you by the Tianzhu Global Network for the Study of Buddhist Cultures with support from the Berkeley Center for Buddhist Studies.

Abstract: The discovery of chiasmus or ring composition in Western religious and classical literature in the 20th century had a paradigm-changing effect upon our understanding of these texts. Recent application of this theory to two important Indian Buddhist texts, the Aṣṭasāhasrikā Prajñāpāramitā and the Vessantara Jātaka, also indicates the presence of such inverted parallel structures. The implications of this prompt us to reformulate several common claims about the composition and central messages of these texts. Extending beyond this and drawing from other examples, I will theorize a possible chiasmic meta-structure which may be the underlying model for this kind of structure found in Bodhisattva literature. 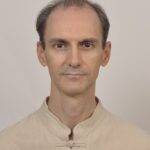 Photo from Department of Philosophy, National University of Taiwan

A native of New Zealand, since 2000 Matthew Orsborn has studied and subsequently taught Buddhism in Taiwan, Hong Kong, China and Thailand, including his Ph.D. from the University of Hong Kong. Presently at Taiwan National University as a Visiting Associate Professor, his research is focused on classical Indian Buddhist texts and philosophy, as well as the practice, thought and institutions of contemporary Chinese Buddhism.