Abstract: Shortly before the Common Era, there developed diverse doctrinal convictions and traditions of praxis, coming from diverse Buddhist communities, mutually impacting on one another, to eventually result in a distinct movement known as the Mahāyāna. Accordingly, it may not be meaningful to determine an exact “original source” in respect of location, community, etc. Nevertheless, these diverse, interacting traditions of doctrines and praxis should have a common source of inspiration – inasmuch as all Mahāyāna traditions commit to the shared ideal of attainment of Supreme Enlightenment/Buddhahood (anuttarā samyak-saṃbodhi). This common source, I believe, is the admiration for the Buddha’s Perfect Wisdom, surpassing that of all the disciples. From this, further consideration of the Buddha’s perfection – Great Compassion, Purity, etc. – led to the development of new and distinctively Mahāyāna doctrines.

Already in the early discourses (e.g. SN, Nālandā-sutta), we find Sāriputta, the foremost arahant, representing Wisdom par excellence in early Buddhism, acknowledging his inability to directly discern the full profundity of a Buddha’s Wisdom – he knows it only through inferential knowledge (anvaye ñāṇa). At the emergence of the Mahāyāna movement, the new message of “Wisdom-perfection” distinctively signifies that the Mahāyāna spiritual goal is no more just prajñā as highlighted by the early Buddhist tradition, but its very perfection (prajñā-pāramitā) in Supreme Enlightenment or Buddhahood.

In this connection, the Sarvāstivāda articulated the doctrine of non-defiled nescience and the related notion of the defilement-trace (vāsanā): The Buddha alone is perfect in wisdom, because he alone has absolutely abandoned the non-defiled nescience; or, in him alone, all vāsanā has been absolutely eradicated. This doctrine came to significantly impact the Buddhological doctrines of all subsequent schools, in one form or another – Prajñāpāramitā, Yogācāra (including the Tathāgatagarbha School) and even the Pāli commentarial tradition.

About the Speaker: Venerable Professor Dr. K.L. Dhammajoti is a Malaysian monk who is a renowned Buddhist scholar, especially on northern Abhidharma doctrines. He taught at the University of Kelaniya, Sri Lanka for 22 years, and subsequently joined the University of Hong Kong as a professor in early 2004, retiring in 2015. Presently, he is the Chair Professor at School of Philosophy, Renmin University, China, and Director of the Buddha-Dharma Centre of Hong Kong. He has published several books – including: Sarvāstivāda Abhidharma, Abhidharma Doctrine and Controversy on Perception, Reading Pāli Buddhist Texts, Reading Buddhist Sanskrit Texts – and numerous research papers on Buddhist Studies. He was also the founding editor of the Journal of Buddhist Studies of the Centre for Buddhist Studies, Sri Lanka.

Ven Dhammajoti has received several awards, fellowships, professorships and honors from universities around the world, including: “Tripiṭaka Vishārada” (1996), by the Amarapura Sri Saddhammavaṃsa Chapter of Sri Lanka; Professor of Buddhist Studies, by University of Kelaniya; “Glorious Sun (Endowed) Professorship”, by the University of Hong Kong; Chair Professorship, by the Renmin University of China; Rector Emeritus, by the International Buddhist College, Thailand.

The Venerable’s life mission is to promote the integration of Buddhist studies and praxis, and the discernment of the Buddha and his Dharma beyond sectarianism. 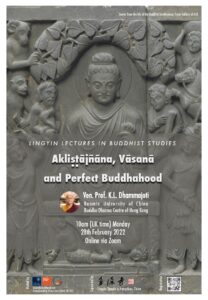