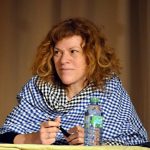 Bogel has served as co-chair of the International MA Program in Japan Studies for seven years and co-founded the International Doctorate program, both of which feature degrees in premodern and modern Japan humanities (https://www.imapkyudai.net/). She founded and has served as Editor of the English-language peer-reviewed print and Open Access Journal of Asian Humanities at Kyushu University (JAH-Q) (https://www2.lit.kyushu-u.ac.jp/en/impjh/jahq/)  (2014–2019 and 2020–present). Before moving to Fukuoka in 2012 she taught at the University of Oregon (1995–1999) and the University of Washington (1999–2012), where she was promoted to Associate Professor with tenure in 2007. Before that she was Curator of Asian Art and Ethnography at the Rhode Island School of Design Museum of Art, which led to her first book (co-authored) on ukiyoe prints. She is the recipient of major research grants from the (US) National Endowment for the Humanities; J. Paul Getty Foundation; Sainsbury Institute for the Study of Japanese Arts & Cultures; Japan Society for the Promotion of Sciences (JSPS); Center for Advanced Study in the Visual Arts (CASVA), National Gallery of Art; and the Japan Foundation. She holds degrees from Harvard University (MA, PhD) and Smith College (BA).

Bogel has conducted research on Buddhist visual culture, religion, and the decorative arts/crafts in Bhutan, Myanmar, India, Pakistan, Indonesia, China, Korea, Vietnam, and other area of Asia besides Japan. Before joining Frogbear, she led intensive fieldwork courses for ten years with her American university students to Kyoto, Nara, and the Mt. Kōya and Kumano areas; fieldwork with Kyushu University graduate students is now a natural extension of research in Japan. The Frogbear Cluster (2020–2022) that she leads with professor  Nguyen will examine talisman cultures in Vietnam, Korea, and Japan. Some of her publications can be found at https://kyushu-u.academia.edu/CyntheaBogel