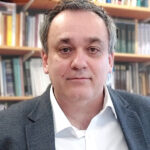 Imre Galambos specialises in the study of medieval Chinese manuscripts from sites in northwestern China. He received his Ph.D. in 2002 from the University of California, Berkeley with a dissertation on the structure of Chinese characters in the pre-Qin period. For the following 10 years he worked for the International Dunhuang Project (IDP) at the British Library, as a result of which his research gradually shifted to medieval manuscripts from Dunhuang. Since 2012, he has been teaching at the University of Cambridge, where he is now Professor of Chinese. Among his main interests is the dynamics of the spread of texts and manuscripts along the multilingual networks known today as the Silk Roads. His books include Orthography of Early Chinese Writing (2006); Manuscripts and Travellers (co-authored with Sam van Schaik, 2012), Translating Chinese Tradition and Teaching Tangut Culture (2015), and Dunhuang Manuscript Culture (2020).