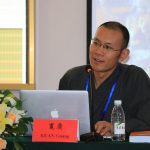 Kuan Guang completed his BA in Buddhist studies at the Buddhist Academy of China from 1994 to 1998. He also studied Theravada Buddhism in the Postgraduate Institute of Pali and Buddhist Studies, University of Kelaniya in Sri Lanka. He conducted his doctoral research on Chinese Buddhism in the Ming dynasty at SOAS, the University of London. His doctoral thesis, completed in 2010, focused on the Buddhist development of Wutai Shan in north China during the Ming dynasty. Before joining King’s College at the University of London as an affiliated research fellow in October 2013, he worked as a Research Associate at SOAS. His research interests lies in Chinese Buddhist history, particularly Ming Buddhist history. He has published several papers on Indian Buddhist masters’ activities at Wutai Shan and other areas in China. His other interests include Buddhist monastic education, the interaction between Buddhism and Confucianism in the late imperial China.