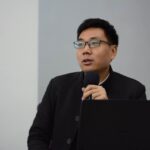 Li Wei is currently a doctoral candidate in the Department of Chinese Language and Literature at Peking University. His research focuses on Buddhism’s impact on the Chinese literary traditions. He obtained his Master Degree with a thesis on the metaphors the Sanlun master Jizang (549-623) used in his commentaries on the Mādhyamika Śāstra, better known as  Zhonglun  (Treatise on the Middle Way) in the Sinitic Buddhist traditions. He is presently doing research on the Avadāna Literature in Six Dynasties, as an extension to his previous work on Buddhist literature.