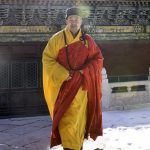 Ven. Miao jiang is a renowned Buddhist practitioner in China. He has served the Wutai Shan Buddhist community for nearly 40 years. He was the first generation of Buddhist monastics to enter into the Buddhist academy of China after it was reopened in 1982. He is currently a member of the Chinese People’s Political Consultative Conference (CPPCC) National Committee, Vice President of the Buddhist Association of China and President of the Shanxi Provincial Buddhist Association. In 2016 he has set up the Wutai Shan International Institute for the Study of Buddhism and East Asian Cultures in his monastery, the Great Sage Bamboo Grove Monastery, to transcend the boundaries between academic researchers and monastic practitioners and foster interdisciplinary research and mutual understanding between Buddhist researchers and practitioners.