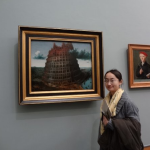 Since my undergraduate years at Beijing Foreign Studies University, I have always been interested in the studies of Chinese Buddhist texts, especially those from the early times. After finishing my Research MA in linguistics at Leiden University, I started working on “Tense and Aspect in Early Chinese Buddhist Texts” at Ghent University while learning more about Buddhism in Asia. My major academic interests include the linguistic features (syntax, language contact, diachronic change) of Chinese Buddhist texts although general linguistic studies and paleography of historical Chinese manuscripts are also fields which I intend to work on.