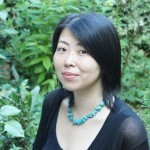 Fuyubi Nakamura (M.Sc., D.Phil. Oxford, 2006) is a socio-cultural anthropologist and curator, and joined the UBC Museum of Anthropology (MOA) in April 2014. She specializes in the anthropology of art, museum studies and material and visual cultures with special interest in Japan and its diasporas, India, Tibet and contemporary art. Fuyubi has taught in the graduate schools at the University of Oxford, the Australian National University and University of Tokyo.

Her investigation into the production and consumption of Japanese calligraphy as a researcher and curator has developed over multiple global locations. Her recent research investigates the world of Japanese calligraphy in Brazil, and Argentina where she was a guest curator at the National Museum of Oriental Art in Buenos Aires (2010-11). Her publications include Asia through Art and Anthropology: Cultural Translation Across Borders (edited with Morgan Perkins and Olivier Krischer, Bloomsbury Academic 2013; the joint winner of the Best Anthology Prize for 2014 by Art Association of Australia & New Zealand) and “Memory in the debris: The 3/11 Great East Japan earthquake and tsunami” in Anthropology Today (2012). She is also affiliated with the Institute for Art Anthropology at Tama Art University, Tokyo as a research associate. More information about her projects and publications: https://ubc.academia.edu/FuyubiNakamura