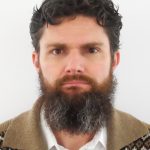 Michael Radich took up his post at VUW in 2005, and received his doctorate from Harvard University in 2007. In 2009, he spent three months at Kyōto University as a visiting scholar, at the invitation of Professor Shingū Kazushige. His first monograph, published in 2011, treats the history of the Buddhist story of the sins and redemption of King Ajātaśatru, as it changed across two thousand years of Buddhist history in India, China and Japan. In the winter term of 2013-2014, he was the Numata Visiting Professor of Buddhist Studies at the Hamburg University Numata Center for Buddhist Studies. Dr Radich also spent the entirety of 2015 in Hamburg, this time on a Humboldt Fellowship for Experienced Researchers from the Alexander von Humboldt Foundation, hosted by Prof. Dr. Michael Zimmermann.