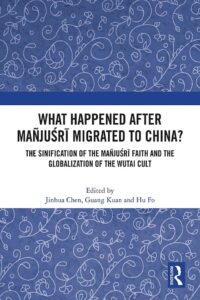 We are pleased to announce the release of What Happened After Mañjuśrī Migrated to China? The Sinification of the Mañjuśrī Faith and the Globalization of the Wutai Cult, published by Routledge.

About the book:
The chapters in this book explore the transcultural, multi-ethnic, and cross-regional contexts and connections between the Buddhāvataṃsaka-sūtra, Mount Wutai and the veneration of Mañjuśrī that contributed to the establishment and successive transformations of the cult centered on Mount Wutai – and reduplications elsewhere. The contributions reflect on the literature, architecture, iconography, medicine, society, philosophy and several other aspects of the Wutai cult and its significant influence across several Asian cultures, such as Chinese, Japanese, Tibetan, Mongolian and Korean.

This book is a significant new contribution to the study of the Wutai cult, and will be a great resource for academics, researchers, and advanced students of Religion, Philosophy, History, Architecture, Literature and Art.

The chapters in this book were originally published in the journal Studies in Chinese Religions.

The Transmission of Wutai Cult from South Asia to China

The Spread of the Wutai Cult in China: Center and Margins

The Wutai Cult in Japan

The Wutai Cult in Tibet, Mongolia, Khotan and Korea