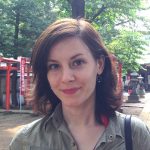 Megan Bryson is Assistant Professor of Religious Studies at the University of Tennessee, Knoxville. Her research focuses on Buddhism and local religion in the Dali region of southwest China as well as the themes of gender and ethnicity in Chinese religions. Professor Bryson has published several articles on these topics in journals such as Asian Ethnology, Journal of the International Association of Buddhist Studies, and Signs: Journal of Women in Culture and Society. Her monograph, Goddess on the Frontier: Religion, Ethnicity, and Genderin Southwest China was published by Stanford University Press in 2016. She spent the 2016-17 academic year on an ACLS fellowship to work on a new project on Buddhist networks in the Dali kingdom. Additional book projects will focus on Buddhist masculinities and Zen in American popular culture.