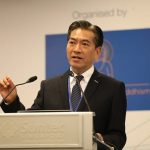 Institution: Tzu Chi University
Department: The Institute of Religion and Culture at College of Humanity and Social Science
Email: rey_her@tzuchi.org.tw

Dr. Rey-Sheng Her is an Associate Professor of the Institute of Religion and Culture at College of Humanity and Social Science, Tzu Chi University; and the Spokesman and Director of Humanity Development of the Buddhist Tzu Chi Foundation, which runs the largest, faith-based NGO in the Chinese world. Dr. Her received his Ph.D. in Philosophy from Peking University. Master of Art on Communication Management, the Annenberg School for Communication of the University of Southern California. As a veteran media professional, he was a senior news anchor and TV program producer. The documentary he produced “The Great Love as a Running Water: Testimony to the Development of Bone Marrow Transplantation”, was selected as the best documentary in the regions of Asia and Africa of the 32nd Emmy Award International. Dr. Her has delivered speeches on Buddhism and NGO Management at Harvard University, Oxford University, Peking University, Renmin University of China, Beijing Normal University, and the University of Hong Kong, and many international symposiums. Dr. Her devoted himself to the religious dialogues between Catholicism and Buddhism. He was invited to speak at Vatican Urbaniana University and Pontifical Colloquiums to promote interreligious dialogues. In 2017, on behalf of the founder of Buddhist Tzu Chi Foundation, The Venerable Cheng Yen, Dr. Her went to Vatican to have an audience with His Holiness Pope Francis, to strengthen the interreligious collaborations.

In 2010, Professor Her initiated the “Tzu Chi Forum”, and has been a co-organizer since.   The forum serves as a platform for all Buddhists and NGO scholars to discuss the topics of the philosophy of humanistic Buddhism and its applications to charity, environment and organizational management. For decades, Dr. Her has been devoted to research in the fields of Buddhist philosophy, especially Humanistic Buddhism, both on theoretical and empirical perspectives, and the Management and Operations of RNGO (Faith-Based NGO).

Besides his effort in the public sphere, Dr. Her also has rich experience in disaster relief. He acted as an on-site coordinator in the relief work of the 2015 Nepal Earthquake, Typhoon Morakot (Taiwan), and the 2014 Kaohsiung Gas Explosions. During the relief work after the 2004 Indian Ocean earthquake and tsunami, the 2011 Japan earthquake and tsunami, Typhoon Haiyan (Philippines) and the 2008 Sichuan earthquake, he served in the disaster relief coordination centers. In fact, many of Dr. Her’s written works have strong basis on his relief experiences.

In academia, Dr. Her’s publications include “From Altruism to Ultimate Awakening–The Altruistic Philosophy and Practices of Dharma Master Cheng Yen”, “The Philosophy and Practices of Buddhist Tzu Chi (Parts I and II), “The Moment of Inspiration”, and “Constructive Journalism”; edited “The Universal Value of Buddhism & the Dharma Path of Tzu Chi”, and “The Dialogue of Religion and Environment”, etc.

He teaches “Religion and NGO” and “Religion and Communication” at the graduate level at the College of Humanities and Social Sciences of Tzu Chi University.  His recent researches focus on the subjects of economic life of Humanistic Buddhism and the organizational transformation of Chinese Buddhist sangha.