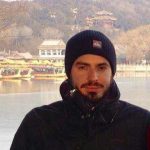 Johan ROLS is enrolled in the PhD program in Religious studies at EPHE (Ecole Pratique des Hautes Etudes, Paris), and also following a co-supervising scheme at Renmin University, Bejing. His research focuses on the history of ideas related to protecting the environment in early China, focused on early Daoist texts. Applying critical approaches to the current discourse on early Daoism as an “ecological religion”, he traces the genealogy and mutations of ideas about humans relations with plants and animals through late antique, Han, and early medieval changes, in both the religious and the ecological worlds.