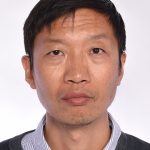 Dr. ZHANG Dewei is an associate researcher at Sun Yat-sen University in Guangzhou. He taught as a visiting scholar at the University of Macau and as a sessional lecturer at McMaster University. He holds two PhDs: the first in Chinese Philosophy from Beijing University (1999), the second in East Asian Buddhism from University of British Columbia (2010). His research covers a wide variety of themes in East Asian Buddhism, Chinese intellectual history, late imperial Chinese history, book culture, and printing history. His current studies have focused on the intersections between socioeconomic and political history and Chinese religions. He has two major projects in progress. The first book manuscript, entitled Thriving in Crisis: Buddhism and Socio-political Disruption in China, 1522-1620, is under the second round of review by the Columbia University Press. It examines how the late Ming (1573-1644) Buddhist renewal took place and evolved under the profound influence of contemporary politics. The second book manuscript which, tentatively entitled “Sacred yet Secular: The Making and Spread of the Printed Chinese Buddhist Canon in East Asia”, is now ready for publication review. It explores how the making and spread of the printed Chinese Buddhist canon interacted with sociopolitical history, in the context of East Asia from the tenth to twentieth centuries. Articles that were published in recent years include “Engaged but not Entangled: Miao feng Fudeng 妙峰福登 (1540-1612) and the Late Ming Court,” “Where the Two Worlds Met: Spreading the Ming Beizang 明北藏 in Wanli (1573-1620) China,” “Challenging the Reigning Emperor for Success: Hanshan Deqing 憨山德清 (1546-1623) and Late Ming Court Politics,” “An Unforgettable Enterprise by Forgotten Figures: Making the Zhaocheng Canon 趙城藏 in North China under the Jurchen Jin Regime,” and “Beyond Seeking for Sacredness: A New Light on the Carving of the Jiaxing Canon 嘉興藏 on Mount Wutai.”