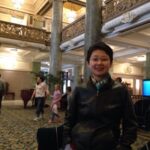 Jessica Zu is an Assistant Professor of Religion at University of Southern California Dornsife. She has published in academic venues on the rise of Yogācāra in modern China and in popular online platforms on the contemporary relevance of karmic storytelling. She is currently working on her book manuscript, Liberation Buddhology: Lü Cheng (1896–1989) and the Birth of a Yogācāra Social Theory. Her dissertation “Toward an Ecology of Compassion: Lu Cheng’s Revolutionary Journey from Aesthetics to Yogacara, 1918-1966” examines the rise of Yogācāra (consciousness-only) Buddhism in modern China from the perspective of global intellectual history.

Her dissertation analyzes the production and global circulation of a series of  multilingual recension of Chinese Buddhist texts that have remained largely unstudied. Her research demonstrates how Chinese scholars constructed an alternative global history of Buddhism to undermine the European construction of the Aryan myth. In addition, by tapping into rich archives in China, Japan, Norway, and USA that preserved relevant witness accounts, her study also reveals the moral dimension of this Yogacara movement: Joining the global conversation on building a just new world order, the Chinese Buddhist intellectuals employed Yogacara doctrines to theorize a social oneness in terms of phenomenological naturalism that does not resort to external physicality. This social turn of Yogacara soteriology allowed these scholars to reject the saving power of science and social Darwinism that, in the early twentieth century China, had largely portrayed human beings bereft of moral agency and passively trapped by the iron cage of natural laws. For these modern Yogācāra practitioners, understanding the functioning of a social totality in terms of mental karmic links proved a powerful means to cure the perceived modern ills of commodity fetishism, excessive materialism and rampant individualism. This early twentieth century Chinese critique of Western secularism also promises a new framework to think through the question of secularity and post-secularity.