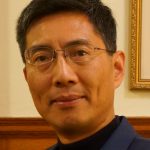 Eugene Wang (Ph.D Harvard, 1997) began teaching at the University of Chicago in 1996 before joining the faculty at Harvard University in 1997. He was appointed the Abby Aldrich Rockefeller Professor of Asian Art at Harvard in 2005. A Guggenheim Fellow (2005) and recipient of ACLS and Getty grants, he served as the art history associate editor of the Encyclopedia of Buddhism (Macmillan, 2004). His book, Shaping the Lotus Sutra: Buddhist Visual Culture of Medieval China (2005) received the Academic Excellence Award from Japan in 2006. His extensive publications cover the entire range of Chinese art history from ancient funerary art to modern and contemporary Chinese art and cinema. He serves on the advisory board of the Center for Advanced Studies, National Gallery of Art in Washington D.C. and the editorial board of The Art Bulletin.